Review of ‘A Brief History of Seven Killings’ by Marlon James 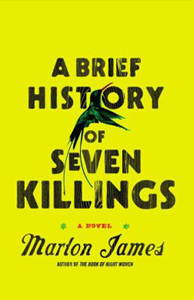 This title is misleading – the book is neither brief (686 pages of small print) nor were there only seven killings. It felt like there were dozens of corpses littering the landscape.

It is telling that several of the book’s endorsements mentioned Quentin Tarantino, known for his violent and graphic movies. Some of the words that I jotted down to describe the book are: crude, angry, violent, hateful, aggressive, male-dominated, depraved. I also found it confusing and difficult to follow.

The story revolves around the attempted assassination in 1976 of Bob Marley and describes the political tensions in Jamaica at the time and the involvement of criminal gangs and thugs, assisting the politicians in their dirty work. It also suggests that the CIA was closely involved in the violence, through supplying training to the criminals in how to use guns. It seems that the US government feared the threat of communism and as a result supported (or conceived) the initiative to kill Bob Marley before he could hold a ‘peace concert’. The assassination attempt failed and the story continues its violent way through to New York and Miami, spanning a period of fifteen years.
When I started the book and spotted the Cast of Characters I was intimidated at the length of it – over 75 characters. I was reading the book on Kindle and it was difficult to ‘flip’ between where I was reading and the character list, which is what I would have done had I been reading a hard copy. However, the list is misleading as the major players become familiar to the reader after a while and the minor players are inconsequential.
The story is told through a number of different characters with very different voices, a number of them speaking in Jamaican patois. It was interesting that while I battled in reading and understanding the patois in the beginning, I got into a rhythm later and could decipher it without too much strain. I found some of the words fascinating – ‘batty boy’ for a gay man, ‘pickney’ for a child, ‘bloodclaat’ as a general expletive, ‘bombocloth’ as another general expletive, ‘bredda’ for brother and ‘dutty’ for dirty.

The book was too violent for me to read before bed and so I went at it during the day. The only reason I persevered and finished the book was because it was prescribed by my book club and I had an obligation to read it in order to comment on it. As I was reading, I was trying to articulate (in my head) why I disliked the book so much. Perhaps it was the constant swearing, the denigration of women, the disregard for life, the absence of hope, the relentless violence. [At this point in my writing I note that I have used the words violent and violence six times.]
Looking for some positives, I can say that the historical angle was educational. I hadn’t known that Marley had had an assassination attempt on him. Also, the author did a convincing job of conveying the violence and hatred, and the cold-bloodedness of the killers.
Researching the author, I see that both his parents were in the Jamaican police force – I wonder if that gave him some of his knowledge of the underworld. Whichever way he got the knowledge, he did a brilliant job of making the reader feel the fear and taste the drugs and hear the bullets tearing into flesh. I felt that I got to know the characters well – the author’s tactic of telling the story through different narrators gave the reader a strong portrait of each narrator (although it was confusing).
I didn’t enjoy this novel but I can recognise the cleverness and artistry of the author.