Review of ‘The Ministry of Utmost Happiness’ by Arundhati Roy 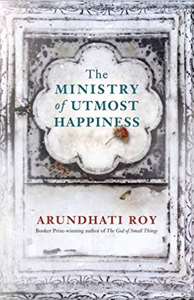 Twenty years ago I went into raptures over The God of Small Things, the 1997 Booker Prize winner by Arundhati Roy. In 2017, like many other hapless bibliophiles, I rushed off to buy my copy of The Ministry of Utmost Happiness by Roy, her first novel since The God of Small Things. I was expecting more of the same, but better, due to the twenty years of practice the author has had in between.

It started well enough, with a cast of quirky characters, beautifully described and brought to life through Roy’s colourful storytelling ability. There was Anjum, a hermaphrodite and hijra, who lived in a hijra commune called the Khwabgah but then left to live in a graveyard, where she founded the Jannat Guest House; there was Saddam Hussain, who got around Delhi on a white horse and always wore sunglasses – he became a permanent lodger at the Jannat Guest House; there was Zainab, a baby found by Anjum, who grew up in the Khwabgah; there was Dr Azad Bhartiya who lived on the street in Delhi and had been on hunger-strike for eleven years – he believed that the Americans were trying to kill him; there were the three men – friends – who were in love with the central character, Tilo; and then there was S. Tilottama (Tilo), who appears to be based, to an extent, on the author. This was covered in the first 160 pages (roughly a third of the book). And then the story started getting serious and spiralled into a rambling treatise encompassing what are presumably the causes that Arundhati Roy champions – a mixture of political and human rights.

All the following are covered in the book:

The Ministry of Utmost Happiness could have been split into two diametrically different books: one light and quirky, the other serious and tragic.

The way these two stories were cobbled together to make a whole felt contrived and forced. On top of that there were some undeniably corny phrases (He had eyelashes that looked as though they had worked out in a gym…) that should have been edited out but weren’t.

That said, the book contains many lyrical passages and Roy certainly gets the message across about political and social injustices. Perhaps communicating the issues is her primary intention, and she cares little for literary acclamation – that is merely a means to an end.

The book has the feel of a Bollywood script and I’m sure it won’t be too long before the movie comes out. It will make an epic movie.

An interesting detail for South Africans – in the Acknowledgements section Roy thanks (amongst many others) Ashwin Desai “whose insights are somewhere in the foundations of The Ministry”. Is this our Ashwin Desai?