Review of ‘The Vegetarian’ by Han Kang, translated from Korean by Deborah Smith 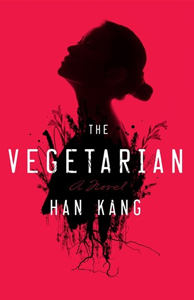 Words that, to me, describe the themes of this story are: visceral, mental, sensual, maniacal, delusional. It’s a book about madness and sexuality.

The book comprises three sections. The first, The Vegetarian, is narrated by Mr Cheong, the husband of Yeong-hye (she is the central character in the book). Mr Cheong always opts for average in everything, including his choice of a wife, and he is proud of that. “Before my wife turned vegetarian, I’d always thought of her as completely unremarkable in every way. To be frank, the first time I met her I wasn’t even attracted to her. However, if there wasn’t any special attraction, nor did any particular drawbacks present themselves, and therefore there was no reason for the two of us not to get married.”

Yeong-hye was a ‘normal’ wife for five years, but then she had a dream and stopped eating meat – in fact, she became a vegan and skeletally thin. She also started to withdraw from society and she practically stopped sleeping. Cheong, however, asserts, “There’s nothing wrong with her, this kind of thing isn’t even a real illness” and he decides not to take her for a medical evaluation. The reader, however, has an insight into Yeong-hye’s mind through brief passages detailing her thoughts and dreams, and it is obvious that she has a mental illness.

There is an account of a painful dinner party, where Cheong is trying to impress his bosses but his wife’s anti-social behaviour embarrasses everybody – except her. Things come to a head at a family party with Yeong-hye’s siblings and their spouses, and her parents. Her father tries to physically force her to eat meat and she responds violently, ending up in hospital. There, where her mother is attempting to feed her a meat broth on the pretext that it is a herbal remedy, we are given a further glimpse into Yeong-hye’s thoughts, “I don’t know why that woman is crying (her mother). I don’t know why she keeps staring at my face, either, as though she wants to swallow it.”

The second section, Mongolian Mark, is told from the point of view of Yeong-hye’s brother-in- law, husband of her sister, In-hye. It is set some two years after the family drama and hospital stay. He is an unsuccessful artist and a kept man – In-hye runs a business that supports the family. The relationship between husband and wife is described as “…that of business partners, whose only shared business was their child”. Brother-in- law begins to obsess over Yeong-hye after a chance remark from his wife about a ‘Mongolian mark’ that Yeong-hye has on her buttock. Yeong-hye has apparently been eating in the intervening period – not meat – and has put on weight and her body has rounded, giving the impression of “an enticing lack of superfluity”.

He has an idea to produce video art of her naked body covered in flowers – painted on her by him. What follows is a period of intense sexual desire and a questioning of morals and of the ability to control impulses, and fear of crossing boundaries.

In section three, Flaming Trees, Yeong-hye has been committed to a psychiatric hospital. The section is told from the point of view of her sister, In-hye, who gives us occasional glimpses into the childhood of the two sisters. In-hye tries to make sense of her sister’s mental illness and to find reasons for it. She is angry with this sister who makes no effort to save herself, while she, In-hye, “had always done her best”. She finds herself “unable to forgive that magnificent irresponsibility that had enabled Yeong-hye to shuck off social constraints and leave her behind, still a prisoner”. In-hye examines her own life and realises that “she has never lived…she has done nothing but endure.”

This novel is unsettling and frightening, and prompts the reader to introspection – how close is anyone to a mental breakdown, how easy is it to cross boundaries to commit unacceptable acts, whose life should we put first?

The surface formality of the characters contrasts with and emphasises the aberrance of the acts they commit.

The spare, simple prose is extremely effective in expressing harshness, beauty, sexuality and madness. The range of emotions that the reader is taken through in this short (183 pages) novel is exhausting and yet it is impossible to put the book down – the writing is compelling.

Perhaps the whole story is summed up in a question asked by Yeong-hye, “Is it such a bad thing to die?”